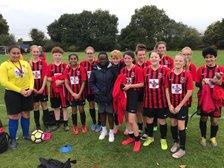 Player of the game Tajah

After being 2-1 down at half time, Oakwood’s Under 15’s Girls upped their game to beat Southdown 6-3.

Libby, celebrating her Player of the Month award, had fired Oakwood into a fourth minute lead, but the impressive Jacey levelled from a ninth minute penalty and, despite four players looking to be in offside positions, Southdown went ahead after 28 minutes with Brooke coolly beating Tajah.

Five minutes after the restart Amy burst through for a well deserved equaliser, and four minutes later Libby’s cross was met by the hard working Shannon, known to her team mates as The Beast.

Jess than scored twice in a minute, her first after 58 minutes coming at the second attempt whilst her second was a cracker from the edge of the box. After 69 minutes Southdown were awarded another penalty but Player of the Match Tajah saved from Paige, although the latter did break through to net five minutes later. An impressive win was sealed two minutes from time by a determined Julia.

A huge Thank you to Alf Blackler for the match report

Red Kit
Please remember to sign in via the track and trace when entering the ground.