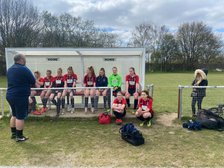 Player of the match Rebecca Lambert Match report to follow

Oakwood met up with Cuckfield Cosmos in the 3rd game of the round robin games off the back of one win and one defeat.

Oakwood didn’t get off to the best of starts conceding a goal after two minutes after the Cuckfield striker was put clear through after a great pass and calmly slotted it away.

After the restart Oakwood attacked and were unlucky not to level it, a corner by Amy resulted in Gracie and Meg both having goal bound shots cleared off the line.

Four minutes later Oakwood got the equaliser, another corner and another goal mouth scramble and the ball was poked home.

A few minutes later a free kick was swung in with Meg getting a touch but the keeper palmed the ball away.

Oakwood were getting on top, but then just before the break Cuckfield made it 2-1.

Unfortunately the second half didn’t go Oakwoods way, with subsequent goals for Cuckfield coming in the 39th 47th and 51st minutes to make it 5-1.

Oakwood will look to get back to winning ways on Sunday when the host Horsham who they beat 8-0 three weeks ago.

As this is a home match only 1 spectator per child.
Helpers required to support the match please