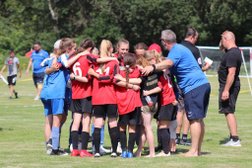 Player of the match 'Imogen' Congratulations

Thank from Ed for everyone who stepped up to support the game going ahead in his absence. Richard, Alan and Paul.
Player of the match this week is awarded to Imogen as she didn't stop battling for the ball the whole match. Even after being fouled on many occasions fighting back to play on. Well done!

Oakwood played their second friendly against Crawley Wasps off the back of a great result last week against Horsham. The Sunday morning weather was lovely, with even the pitch, with the amount of sand on it making you feel like you were on the Copacabana. I was half expecting Barry Manilow to turn up.( Parent Joke)

Oakwood started brightly and had the majority of the possession. In the 9 minute a surging run down the right by Meg V who put in a fantastic cross, was met by Meg G who first time shot hit the crossbar. A move that deserved a goal. Unfortunately a minute later, against the run of play Wasps went ahead when a ball through the middle which was pick up by the striker who put the ball passed the keeper who could do nothing about it. Oakwood continued to press but were unable to get an equaliser. Despite three players getting winded in the first half from with they quickly recovered, in the 9th minute of injury time a corner from Wasps was superbly converted to make it 2-0.

The second half was an interesting affair where Oakwood seemed to be on the end of numerous strange decisions. Wasps went 3-0 up shortly after a free kick was given for a alleged back pass by Darcie which came off her thigh. Despite the Wasps manger saying play on as he knew the laws of the game, the ref gave it after pressure from the Wasps supporters. Minutes later a wonder goal by Meg G who lobbed the keeper from just inside the half way line which bounced over the line and into the roof of the net. No more than Oakwood deserved. Oakwood were in the ascendancy and a fantastic through ball from Meg V to Amy who travelled fully 20 yards before the linesman decided to flagged Meg G offside despite Amy still in control of the ball and bearing down on goal. A few minutes later Amy was again through and despite two Wasps players strongly challengingly her got the ball passed the keeper that agonisingly hit the post. It transpired that had it gone in it wouldn’t have stood as there was alleged foul by Amy. Decisions went from bad to worse when a back pass by Wasps was caught by the keeper inside the six yards box, but Oakwood were made to take this from the edge of the box when it should have been the edge of six yard box. The resultant free kick was block by Wasps.

Oakwood deserved so much more from the game. The all played well and this despite having to play the game without substitutes. In my opinion they were on top for most of the game with more possession and better chances, I think the way Wasps players and parents celebrated they also knew this as well.

Onwards and upwards. Oakwood can put this right is two weeks time when they host Wasps at home.

Kick off time still to be confirmed as initial time has been supplied at 10.30 kickoff. Ed has requested 10 am kick off.
RED KIT