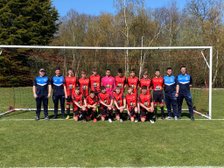 Oakwood continued their great start to the season with a hard fought 5-3 win away to Junior Elite.
The oaks put their opponents under pressure straight away and won a penalty after 10 seconds, which was slotted into the bottom corner to make it 1-0.
Oakwood were the stronger team in the first half and missed a number of chances to extend the lead and headed into half time with a narrow lead.
Junior Elite started the second half strong and scored 2 quick goals to take the lead. Oakwood then worked hard and it wasn’t long before they got the equaliser with a great strike from outside the box. It wasn’t long before Junior Elite again took the lead from the penalty spot.
Oakwood then equalised straight away and took control of the game for the final 10 minutes and the hard work and determination paid off with 2 late goals.
Another great performance by the boys to keep u p the 100% winning start.
Share via
FacebookTwitter
https://www.oakwoodfc.co.uk/te
Recent news